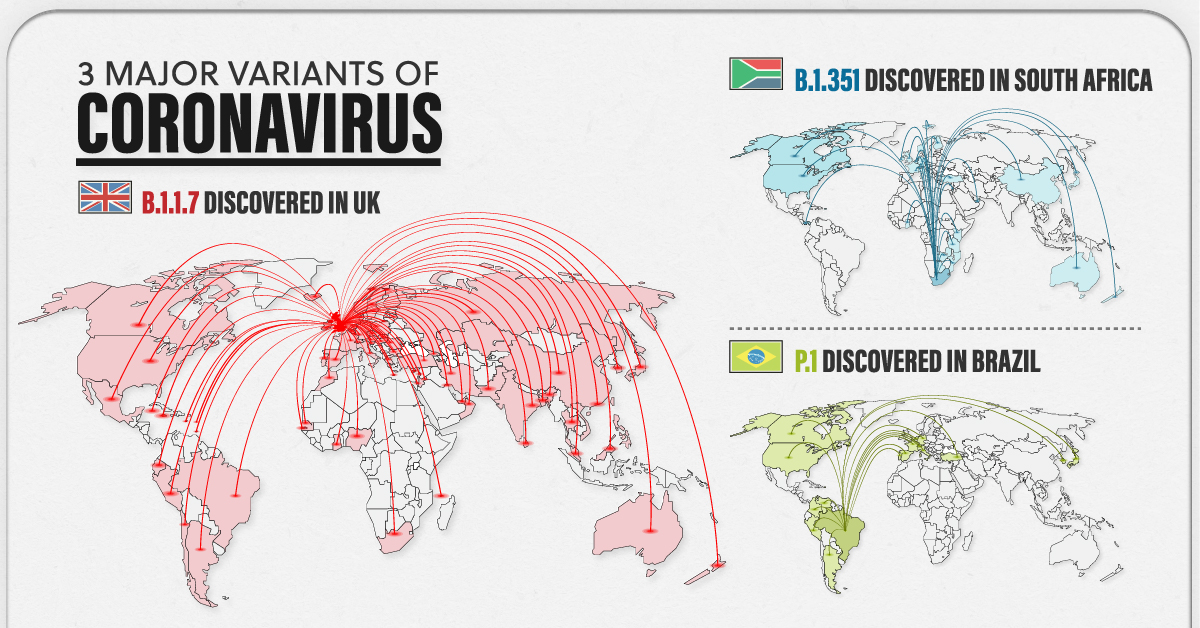 Can I share this graphic?
Yes. Visualizations are free to share and post in their original form across the web—even for publishers. Please link back to this page and attribute Visual Capitalist.

When do I need a license?
Licenses are required for some commercial uses, translations, or layout modifications. You can even whitelabel our visualizations. Explore your options.

As billions of people gear up for widespread vaccination against COVID-19, another issue has reared its head. Three major COVID-19 variants have emerged across the globe—and preliminary research suggests these variants may be cause for concern.

But what makes them different from the original strain?

The following visualizations answer some key questions, including when these variants were first discovered, how far they’ve spread worldwide, and most importantly, their potential impact on the population.

Some Context: What is a Variant?

Before diving in, it’s important to understand why viruses mutate in the first place.

To infect someone, a virus takes over a host cell and uses it to replicate itself. But nature isn’t perfect, and sometimes, mistakes are made during the replication process—those mistakes are called mutations.

A virus with one or more mutations is referred to as a variant. Most of the time, variants do not affect a virus’s physical structure, and in those instances, they eventually disappear. However, there are certain cases when a mutation impacts part of a virus’s genetic makeup that does change its behavior.

According to the U.S. Centers for Disease Control (CDC) a change in behavior can alter:

The three major variants emerged at different times, and in different parts of the world. Here’s an overview of each variant, when they were discovered, and how far they’ve spread so far.

The B.1.1.7 variant was detected in the UK in the fall of 2020. By December 2020, it had spread across the globe, with cases emerging across Europe, North America, and Asia. Currently, the variant has been reported in roughly 94 countries.

Early research suggests it’s 50% more transmissible than other variants, and potentially 35% more deadly than the standard virus. Luckily, studies suggest that some of the existing vaccines work well against it.

In October 2020, the second major variant was discovered—B.1.351. It was first identified in South Africa, but by end of the year, it had spread to the UK, Switzerland, Australia, and Japan. There are approximately 48 countries with reported cases, and research suggests several of the existing COVID-19 vaccines may not be as effective against this variant.

The P.1 variant was the last to arrive on the scene.

It was first discovered in January 2021, when Japan reported four cases of the variant, which was found in travelers who had arrived from Brazil. Approximately 25 countries have reported cases of the P.1 variant, and early research suggests this variant is not only more contagious, but could also have the ability to infect people with natural immunity who had already recovered from the original strain.

While there have been preliminary studies showing a dip in vaccine effectiveness, some experts emphasize that it’s too early to tell for certain. More data is needed to gain a deeper and more accurate understanding.

In the meantime, experts are emphasizing the importance of following our current public health strategies, which include physical distancing, vaccination, washing your hands, and using masks.

10 Reasons to study for the ACCA – www.count.i.ng